The impact on the City's annual budget is the loss of the TBD revenue, approximately $290,000 for street maintenance and preservation.

The Battle Ground Transportation Benefit District (TBD) was established in 2014 as a means to provide adequate levels of funding for the purpose of ongoing transportation improvements that preserve and maintain streets within the city of Battle Ground.

The revenue created - approximately $290,000 annually - was used for the sole purpose of transportation improvements such as the maintenance, preservation and construction/reconstruction of roadways within the City of Battle Ground.

View the WA State Department of Licensing Transportation Benefit District page for additional information on TBDs including a list of vehicles subject to the fee and a list of exempt vehicles.

2016
Projects funded in 2016 include the repainting of lane striping throughout the city and nearly 4 miles of street maintenance and preservation through a crack and slurry sealing process.  2016 Crack & Slurry Seal Map/Schedule. 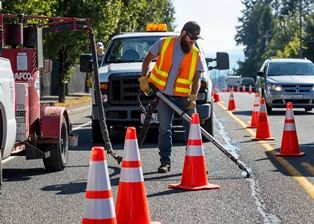 Crack sealing... micro-surfacing... chip sealing... mill and fill... what does it all mean? Learn about the various maintenance and preservation methods we use to maintain and preserve city streets.